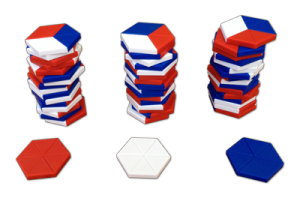 OBJECT OF THE GAME:

Players select one of the 3 solid coloured tiles (red, blue or white) to be their chosen colour. If a player’s solid tile is red, their objective is to make red hexagons. The 48 multicoloured tiles are mixed up and divided equally among the players:

There are 2 different types of multicoloured tiles:

Players may find it useful to separate their tiles into 2 piles according to the colour sequence. The advantage of sorting the tiles becomes clear as the game progresses.

Decide on who is going to start the game, and that person places their tile down. (See Fig. 1)

The first tile played must be one of the multi-coloured tiles. Play continues in a clockwise direction, with each player in turn placing a tile so that their chosen colour connects to a corresponding colour on the tiles that have already been played.
(See Fig. 2)

RULES OF POSITIONING AND PLAY:

Players must position their tile so that their chosen colour connects with the corresponding colour on a tile that has already been played. (See Fig. 2 & 3) If more than one side touches tiles already in play, then all colours on the sides that touch must match.

Figs. 4, 5 and 6 all show tiles in positions where the colours do not match and so the moves are illegal.

Watch How To Play HexAgony

For an easier way to play, why not try the “Pass the Bag” version of HexAgony. The aim of the game is the same, the scoring is the same, but instead of dividing the tiles out at the start of the game, choose a colour and take the corresponding solid counter, and when it’s your turn simply draw a tile from the bag and play it where you can.

Full instructions can be found here on the Game Variations page.